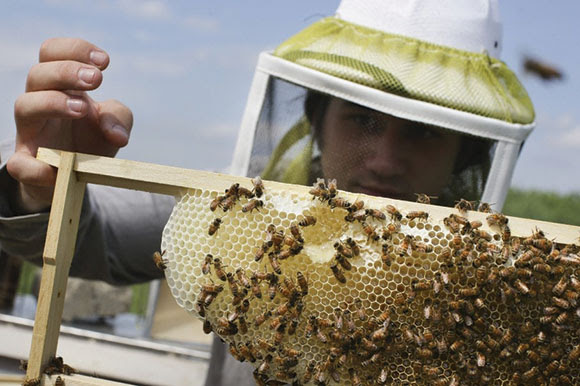 A volunteer checks honeybee hives for queen activity as part of a collaboration
between the Cincinnati Zoo and TwoHoneys Bee Co., in Mason, Ohio.
(AP Photo/John Minchillo, File)

The Environmental Protection Agency is pulling from the market a dozen products containing pesticides known to be toxic to a linchpin of the U.S. food system — the honeybee.

The agency announced Monday it has canceled the registrations of 12 pest-killing products with compounds belonging to a class of chemicals known as neonicotinoids, as part of a legal settlement.

For years, beekeepers and wildlife conversationalists alike have voiced concern that the widespread use of neonics, as the chemicals are commonly called, is imperiling wild and domesticated bees crucial to pollinating commercial fruit, nut and vegetable crops.

The Trump administration’s action was welcome news to some environmentalists. “Certainly we have a ways to go,” said George Kimbrell, legal director at the nonprofit advocacy group Center for Food Safety, whose lawsuit prompted the EPA’s action. “But it’s an important first step in acknowledging the harm they cause.”

The EPA has pulled other neonics from market before, agency spokesman John Konkus said in an email. But close observers of the agency say such actions are rare.

“For the EPA to pull a previously registered pesticide is a pretty major step,” said Mark Winston, a professor of apiculture and social insects at Simon Fraser University in Vancouver, B.C. “It’s not something they do very often.”

The decision follows five years of litigation in which the beekeepers and environmentalists pressed the agency to mount a response to the use of neonics as regulators in Europe and Canada have taken steps toward banning the chemicals.

Finally, at the end of 2018, three agribusinesses — Bayer, Syngenta and Valent — agreed to let the EPA pull from shelves the 12 pesticide products used by growers ranging from large-scale agricultural businesses to home gardeners. The legal settlement also compels the EPA to analyze the impacts of the entire neonic class on endangered species.

Two of the pesticide makers, Bayer and Valent, say their products are tested and safe to use, noting that the environmentalists and beekeepers won their case on the technical grounds that the EPA did not follow the right steps under the Endangered Species Act when registering their products.

“Neonicotinoids are rigorously tested before going to market to ensure they can be used safely and effectively,” said Steve Tatum, a spokesman for Valent, which makes four of the delisted products.

Bayer noted its two products targeted by the EPA action are not sold in the United States. But spokesman Darren Wallis added: “Growers rely on these critical pest-management tools because of their performance against destructive pests, as well as their favorable human and environmental safety profile.”

Concern over neonics has grown since 2006, when beekeepers first started witnessing the sudden and mysterious collapse of honeybee hives across the nation.

Researchers have shown the compounds to be harmful to bees in laboratory tests. But they have had less luck pinning down the pesticides’ effects on beekeepers’ colonies when they go about their work pollinating apple orchards and other farms.

In his second term Barack Obama, who had earlier approved installing a beehive on the South Lawn of the White House, launched an initiative to promote the health of honeybees and other pollinators.

But Rebecca Riley, legal director of the nature program at the Natural Resources Defense Council, said that the agency has failed often in the past to adequately consider the potential impact of its pesticide approvals on endangered animals — something every federal agency is supposed to do.

“EPA for years has been ignoring this requirement of the law,” she said.

That has led to a number of lawsuits, such as one the NRDC filed in 2017, asking a federal court to vacate the registrations of nearly 100 products that contain one of several insecticides that are harmful to various bees, butterflies, birds and insects. That case remains unresolved, even as the separate Center for Food Safety case led EPA to pull some pesticides from the market.

“This is a win for both the rule of law and also for bees, birds and other wildlife impacted by these pesticides,” Riley said of the latest case. “But the reality is there are hundreds of pesticide products on the market. So, this is important … but it does not get rid of the danger.”

Brady Dennis contributed to this report.

Permanent link to this article: https://gglba.ohiostatebeekeepers.org/resources/past-front-page-box-archive/epa-blocks-a-dozen-products-containing-pesticides-thought-harmful-to-bees/